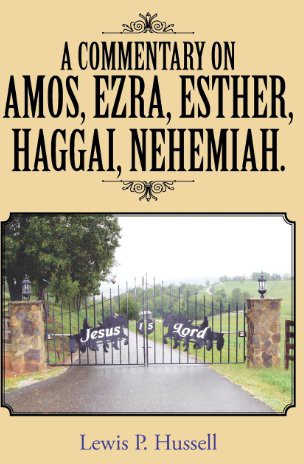 A Commentary on Ezra

Cyrus allows the exiles to return—this kingdom stretched all the way from India to Ethiopia. The first year of his reign was BC 538. The Lord fulfilled the prophecy of Jeremiah and stirred the heart of Cyrus to issue a public notice and it was posted in all 127 provinces. The notice begins by saying that God was behind the project and that he was acting in his behalf. He empties the museum and crates up the entire artifact and lets Ezra take it back to its rightful owner. Then God stirred the hearts of priests, Levites, and tribal leaders to pack for moving. Cyrus was a “hands on king” and orders his treasurer to turn over to Sheshbazzar (the new governor appointed by the king) all 5400 items. Keep reading for more details as I explore this book verse by verse chapter by chapter.

Ezra prayed, wept, confessed and was in an ecstasy of rage.  He resented what was happening like a new broom in an old mess.  Boiling with indignation he threw himself on the ground and a group came and wept with him.  Shecaniah suggested the following plan:  Make a covenant with God and then divorce the heathen women.  He encourages Ezra to take courage and that all is not lost.  So Ezra stood up and made them swear with a solemn oath that they would keep the law of God.  A proclamation was issued for all exiles to come to Jerusalem.  Three days later on the 19th. Of December sitting or standing in a soaking rain they confessed their sins and promised to separate themselves from the pagan women.  However, this required some time for the judicial system to hear the cases and issue judgment.  The plan was followed and beginning on December 29th. Court was in session and concluded by March 27th. Priests were named—gatekeepers were named—everyone guilty had his name published.  Without an Ezra the nation would have repeated their sinful excesses.  Pray that God will send us an Ezra!

Ezra 2 RETURNING TO THEIR HOMELAND.

This chapter will list the family names of the exiles who returned from Babylon. Remember that they were slaves in Babylon and after the war were taken to Persia and now are allowed to return to the land of their ancestors.
Three families had lost their genealogical records so until they had God’s approval was not allowed to officiate in priestly duties. A total of 49,897 people, including servants and singers return to their homeland of Israel. You are now invited to join with me in a verse by verse exposition.

Ezra 3 DREAMS THAT FUELED THEIR PASSION.

It was the dreams that fueled the passion of the exiles.  This book shows us that God will supply the desire as he moves in our heart.  This chapter begins with building an altar according to the instruction in the Law of Moses.  It was built on the old site and sacrifices were offered.  They also observed the festival of tabernacles.  All of this occurred before the foundation of the temple was laid.  They hired masons and carpenters from Tyre to help in preparing and transporting materials for the temple.  The work force had supervisors which were under the direction of Jeshua the General Foreman.  They dug the footers and laid the foundation stones and upon completion of the foundation a religious gathering occurred and a band played music—singers sang—it was a joyous occasion—and shouting could be heard in a far distance.

As the exiles rebuild they were approached by their enemies who volunteered to help them with their project. But Zerubbabel and the leaders told them that they had neither part nor lot in the matter. These same people did everything possible to stop the work. First they tried to frighten them and then tried bribery. This went on during the administration of Cyrus and Darius. Later after Cyrus is dead and Xerxes came to the throne the enemies tried to get the new king to shut the project down. We are told that the letter was in Aramaic language and the king responded by shutting the job down. The work had stopped and would not resume for the next sixteen years.

Ezra 5 A DECREE TO STOP BUILDING THE TEMPLE

This chapter introduces us to Haggai and Zechariah two of the prophets of that era.  Zerubbabel the Governor of Judea re-starts the building project which had been stopped years earlier.  However, Tattenai (a regional Governor of Trans-Euphrates in the Persian empire {there was 20 such Governors which had control over the 127 provinces of the empire} also called Satraps.)  This regional Governor and his staff pay a visit to Jerusalem and did not like what they saw.  Their regional report was sent to Darius with a request to look up the original decree and issue a ruling to block all efforts to rebuild the temple.  A full examination of the letter is reserved for the commentary.

At Ecbatana in the fortress a copy of the original decree was found in the archives. All the specs were in the original decree including height and width. It was to be built on the original site and the royal treasury of Persia was to pay all expenses and the museum pieces were to be returned. So, Darius sent the following official letter to Tattenai: Stay away—Do not disturb—keep your mouth shut—allow the work to proceed. You must pay all construction costs from taxes collected in your province, supply all sacrifices plus wheat, salt, wine, and olive oil fro daily needs. Any violations of my decree will result in beatings, and confiscation of property. Darius issued the decree and it must be obeyed with all diligence. This commentary will illuminate the text and move you to be an Ezra to someone.

Ezra 7 A NATIONAL PASSION FOR THE WORD

Dramatic change is about to occur—the crowd is electrified—Ezra is weeping—confessing their national sins and begging for forgiveness. The fire of revival can be felt from priest to peasant. They had never heard such a passionate preacher. He loses no time in getting to the point. He opens the old book and the sweet flow of the love of God and his word flows like a river. There was a passion for God and a hunger for getting right with the Lord. May God stir our hearts today for a national response to have the fervor and emotion that would transport us into a spiritual ecstasy and rapture like that of the Protestant Reformation. May God lift us out of our apathy, indifference and coldness. Pray for God to awake us.

Ezra 8 CAMPING AT THE AHAVA CANAL

They are on their 900 mile journey to the homeland of their fathers when the roster was looked at and Ezra saw that no Levites were among them. Ezra realized that the worship would be hamstrung without these men. So, they remained camping at Ahava Canal for 3 days while Ezra sent some of his staff to Iddo in Casiphia to help find some Levites. They prayed and fasted for a safe journey which would take a little more than 3 months. God heard their prayer. Twelve leaders from among the priests were in charge of the safe arrival of silver and gold etc. They were to guard it with their life. On the 8th. of April BC 458 they broke camp and started the long journey from the Ahava Canal, upon arrival they rested 3 days and on the 4th. day deposited the valuables in the temple and entrusted it with those in charge. The exiles sacrificed burnt offerings and a copy of the king’s decrees was delivered to Governors in Trans-Euphrates, upon reading the decree these Governors then cooperated by supplying the aforementioned materials. The commentary section will provide additional information.

Ezra’s 9 EZRA LAYS THE SCRIPTURES ON THEM

Some of the Israelites had intermarried with the Canaanites, Hittites, Perizzites, Jebusites, Ammonites, Moabites, Egyptians and Amorites. So the holy race was being polluted with the detestable practices of the heathen and to make matters worse, the officials and leaders are some of the worst offenders. Ezra flies into a rage, he is appalled, enraged, incensed, furious and irate. Ezra realized that these priests and leaders are not fit to associate with the common folk. He lays the scripture on them and then sat down appalled till the evening sacrifice. At 3 O’clock he stood up, his clothes were torn and he lifted his hands in prayer and said he was ashamed, he said that their sins were piled higher than their heads that their guilt had reached to heaven. Ezra recounts God’s grace in their history and claims that they have polluted the land. He claims that they are an escaped remnant and that none of them could face God in such a condition. He resented what was happening like a new broom in an old mess. The answer to Ezra’s prayer will come in the next chapter.